Cinema Sundays at the Organizing Centre 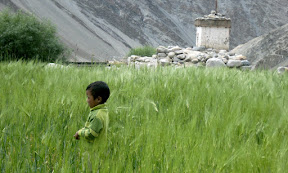 I caught the last 15 minutes of the film, Schooling the World: The White Man’s Last Burden, at the beautiful intimate space of the Organizing Centre for Social and Economic Justice in Vancouver, on Broadway just off Fraser. They hold movie screenings every Sunday at 1:00 pm. Entrance is by donation, and kids are welcome! There were about 5 or 6 running around there yesterday, plus a super cute dog. Entrance is by donation, which gets you popcorn and coffee. (Coffeeeeeee.) The next two films are going to be about social medicine and agriculture/food. It’s a really great way to spend a meaningful Sunday with your kids.

The film was set in India’s northernmost state of Ladakh, and illustrates the pitfalls of “Western-style” education and makes links between language, culture, globalization, and colonialism. I have to admit that I love much of the knowledge I have gained in my history of studying in Western educational institutions, but that’s because I love and value all kinds of knowledge. But I also value other kinds of ways of knowing. As one young student from Ladakh recounted, “If a student speaks Ladakhi or Hindi [instead of English], they get punished.” After the screening, we had a round of feedback from the audience, some of whom spoke powerfully and eloquently about damage they or their ancestors have sustained from colonialist educational experiences.

Here’s the trailer from that movie. (By the way, you can host a screening of Schooling the World, and I believe it’s affordable to do so. It’s also worth reading the comments on the welcome section of the movie’s blog, where a small and thoughtful discussion took place in the comments section.)