Biomodd progenitor Angelo Vermeulen never ceases to surprise me with his ability to make things happen. He’s arranging to have me and Biomodd collaborator and UPOU colleague King Librero spend some time at a very cool research center in Belgium, in a “mini-residency” there. (I’ll say which center the moment it’s all confirmed!) Depending on King’s own interests, here are some of the projects that I’ve had on the backburner that I would be interested in working on: 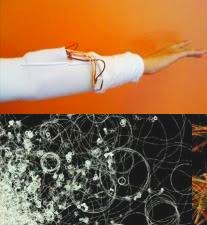 Expressivity and accelerometry (my research area in grad school)

As mobile phones are becoming ubiquitous, so are accelerometers, the sensors that are used to sense motion which is then interpreted by the mobile phone software. Motion recognition through accelerometry has been done for decades, but the use of accelerometers for detecting expressive, poetic motion has been under-explored.

How can the property of acceleration, as measured by linear accelerometers and gyroscopes, be used to recognize, interpret, or generate expressive human movement? This is the central question of my thesis.

For a residency, I would spend part of the time reviewing the existing literature on motion recogntion and movement expressivity, and part of the time in a studio in a phenomenological exploration of how I, as a trained dancer, use the notion/property of acceleration to generate different and specific qualities of movement (as typified, for example, under Laban Movement Analysis). Triangulating from phenomenological data, empirical data (e.g., linear accelerometers typically sense acceleration along orthogonal axis, and gyroscopes capture rotational acceleration), and the literature review, I would produce (as a result of this residency) testable hypotheses on how accelerometers and gyroscopes can best be used to support the sensing and recognition of different forms of expressivity in human movement.

Wiremap/Lumarca is a low-cost, volumetric display made of string or wire created by Albert Hwang and Matt Parker:

I made a version of this tool and used it to display a landscape of bamboo under a star-filled night sky during a live performance. I would like some time and resources to expand the use of Wiremap/Lumarca in any of the following ways.

This would involve taking the original Wiremap display, perforating the acrylic boards so that the strings can slide up and down, and experimenting with different kinds of materials for the string. We might also design some visualizations that are appropriate to these modifications. The visualizations would be used to emphasize the expressive capacities of the human body and reveal something about the internal experiences of the dancer. For a more detailed discussion, please see this poster PDF.

As a musical visual instrument

I would treat the strings as individual sound-generating tools that would respond to force and pressure. I may use infrared cameras to detect the motion of the strings, or else some kind of physical sensing (flex sensors, magnets) attached to the base of the strings.

In either case, I would highly recommend inviting the original designer of Wiremap/Lumarca, Albert Hwang, to take part in the residency with us.

Interfacing or expanding the Apology Grove

On ApologyGrove.org, you can make an apology, view and witness public apologies, and respond to apologies made to you using the Apology Grove. A virtual bamboo is planted for every apology made, and a virtual cedar tree for every forgiveness registered. Use the menu on the left to make an apology or view and witness public apologies. You can also respond to an apology made to you using this site.

I would like to spend some time (preferably working with other artists) to expand on the ideas around the apology grove. Perhaps we can create better, more aesthetic visualizations for the virtual trees. Or link it to a robotic arm that plants actual cedar and bamboo. Or interface the Apology Grove to other kinds of systems. Or have a discussion: why the heck would this matter at all? The slow food movement is (somewhat paradoxically) gaining momentum. We are realizing speed and convenience exact a hefty price when it comes to food, agriculture, and biological diversity.

Nothing of such an impulse to slowness exists in technology. In the fields of computing science and engineering, “Moore’s Law” (which predicts that processor power will double every six months) of the doubling of processor is regarded as something inevitable. But it has been suggested that it has become self-fulfilling prophecy that drives semi-conductor manufacturers.

Can designers of new technology learn from the slow food movement? What about “slow” technology? Is there a point of slowing down the pace of technological development? Or, perhaps it can be argued, as others have, that greater emphasis is needed in designing technologies that support reflection, meditation, and other forms of slow thinking.

Choose Your Own Country

In 2011 (an election year for Canada), an online tool called Vote Compass went viral among Canadian Internet users. The tool measured their opinions on issues ranging from the environment to military spending to immigration:

Thirty questions had six possible Likert-scale type responses, resulting in over 2×1023 different options. If we reduced the number of responses to half, that’s still 2×1014 different possible combinations. It occurred to me that in effect, each of these combinations represents a group of people who could all live together in agreement over fundamental issues.

I propose working with other artists/designers on making either an interactive installation or a social media-based web tool that would ask similar/identical questions and link people who respond similarly to each other.

I do not necessarily think that we should only live with people we agree with. In fact, I expect that the usefulness of this tool would cause debate. And that would be a good thing.