I’ve recently gotten involved with the municipal elections in Vancouver, throwing my support behind the Coalition of Progressive Electors (COPE) and my friend RJ Aquino (who is running for City Council) in particular. Participating in local politics has been invigorating, although I am still as wary of the game as I am with any other form of “us versus them” relationships.

During the all-candidates debate last week at Langara College, I worked with other members of RJ’s campaign team to make students, staff, and visitors at Langara aware of the upcoming elections by appropriating my newest, coolest internet purchase: a remote-controlled mini-blimp in the shape of a clownfish. Here it is in action:

Cool as this toy is, the problem is that the novelty wears off eventually. But then I realized that this was a perfect campaign tool to grab people’s attention! 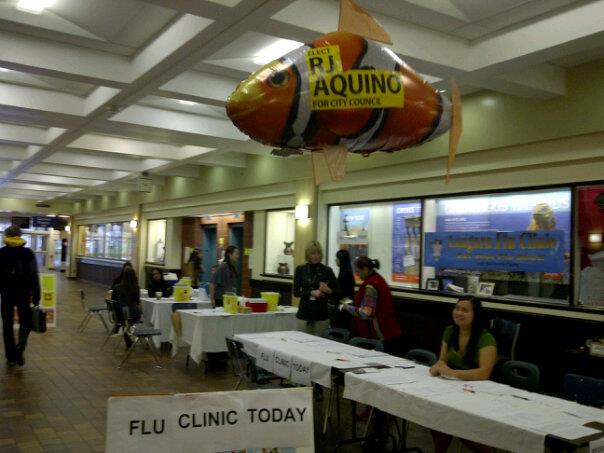 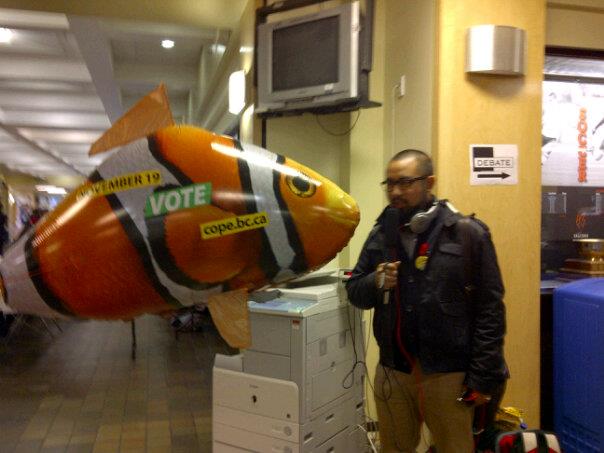 As you can imagine, we got lots of attention from everyone. I think the coolest moment of the day, though, was when a sharply-dressed woman who looked about fifteen years older than me came up to me and complimented us on our election tactic. When I asked her if she had decided who she was voting for, she said, “Yes, I have, but I’m voting for the NPA. But you know, the important thing is to get people out to vote.” It was a warm, fuzzy, cross-partisan moment.

The feeling of goodwill had faded by the time, a couple of days later, someone brought to the attention of the COPE campaign team a flier that was being distributed by NPA’s Suzanne Anton. The flier was innocuous-looking enough; in fact, it captured what looked to be another warm and fuzzy moment between Anton and two super-cute Filipino kids. What was wrong with it? I’ll let the COPE press release speak for itself. 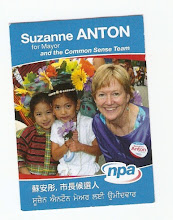 Vancouver- NPA Mayoral candidate Suzanne Anton has sparked anger from two Filipino families after she used their daughters’ faces in her campaign literature without the parents’ consent.

The leaflet features Suzanne Anton posing with two Filipino girls at a cultural event.  The parents however, were never consulted about the picture being taken, or published.  The photo is featured in the NPA’s promotional material, and is being distributed by Anton herself, across the city.

“Doesn’t she have her own supporters to take pictures with?” asked Cliff Belgica, the father of one of the girls featured in the photo. “Why does she need to steal our children?”

“It’s not right,” he continued. “We were never even asked. It is very shameful behavior – especially for someone who wants to be mayor.”

“We demand an apology from Anton herself, and assurance that this leaflet will no longer be handed out,” added Belgica.

The family is seeking legal counsel on the matter and is considering legal action.   “We want to ensure that the NPA doesn’t use any other children or families for their material, when they aren’t aware of it, and do not want to be associated with the them,” said Belgica.

Anton has been reported to have apologized for the flier, but the slip in judgment is pretty eyebrow-raising.