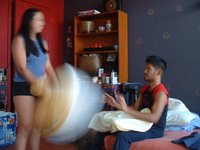 As Delia tosses this pillow to me, she says, “Diego, change the pillow case . There’s stains all over it.”

This is in Delia’s apartment in Leiden, a university town 20 minutes southwest of Amsterdam. It’s a very contained and lovely thing. Space is allocated where it’s needed, deprecated where it isn’t. Well, at least according to me. We made a soup with porcini mushrooms, spinach, and some sort of ham-filled pasta that I’ve never seen before. Yum.

I made my way from Schiphol (which is a beautiful airport) to Leiden Centraal on a train. There’s a lot of agricultural land. And a lot of canals. Those tourist guides weren’t kidding. From the plane, I had a magnificent view of the canals. There’s not really much I could say to do the canals justice, especially on a summer day like this and one can see hundreds of boats.

(Delia just made the same observation I had made on the plane: “When I first came here, there was something very odd about the landscape. I eventually figured it out: all the trees are evenly spaced and at the same height. What sort of people are these that would do this to their trees?!?!” Delia’s a defender of all things green and leafy.)

I can’t believe I’m here. I’ve been grinning like a maniac since the plane touched down. (Although it certainly wasn’t because of Air Transat’s “meals”.)

Annique, Amber, Edmelia, Joanne, and Karl gave me a lovely send-off at the Vancouver airport. We sat around, drank red wine, ate chicken wings, and said some very sweet things to each other. Yesterday, Spencer and I drove around, went to Dairy Queen, and put together an IKEA shelf. Romi and I mucked about and went for random drinks around the drive; the highlight of that was braving an unknown sardine dish at WaaZuBee. Zailda gave me a whole lotta chocolate and a blank journal with the most inspiring quotes. Matt and I sat around last night and talked about how Vancouver is going to get worse over the next little while.

(My god, how mundane those descriptions were. Why can’t I just say that I hung out with my friends and enjoyed their company and had a few tearful moments and lots of laughs?)

And now I’m in the Netherlands, and Delia is replanting her new basil plant in an old rice cooker pot. (The Teflon wore out, she claims.) We’ve settled into our old comfortable pattern. She talks, I’m busy with something else. But our respective neuroses have matured. It’s great. 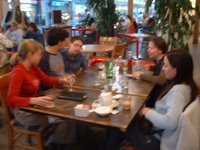 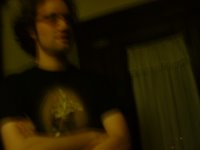 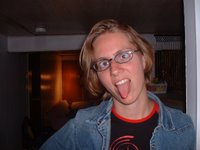 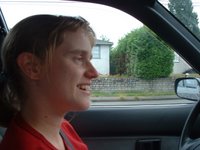